Walking down or up a subway stairway is really where I am my most zen, and have basically all my most important thoughts...I never had shower epiphanies, but man, get me on some subway stairs and I'm Nietzsche.

How do you spell his name!? I don't really know any Nietzschean tenets either, I was particularly emotionally exhausted when we had to read him in college, so I just sortof went with the flow and talked AROUND Nietzsche.  Ok. Now I need to look up some Nietzsche quotes, because I feel like he was pretty sympathetic towards things like dancing and music. I always think of him as a sentimental existentialisty theorist guy. Am I right?

Ok i take all that back, this guy hates hope and faith, but likes dancing and jokes?!!? Nietzsche sucks. Ugh, these old philosopher dudes are so deep. Get over it! Believe in something! I literally NEVER want to read Nietzsche now. Damnit, i should've just stuck to not my guns of never talking about pretentious old white men because they do that enough for themselves. What would a humble young non white lady say about this? !

You know what? I cut and pasted some quotes and now all this formatting is messed up. I'm just going to own it. Well, i entered into this discussion because I wanted to talk about how I challenged my friend Scott to blog everyday in June. So far, he is winning, and I am losing, so here I am, trying to catch up.

But no more meta crap.

I'm going to try for stories my keyboard wants me to remember.
See you tomorrow! Or maybe today!
1 comment:

My pal Danya just asked me to find "that amazing video you shared forever ago that was a few sister singin a cappella in a church...?"

AND I FOUND IT!


I also found other stuff that was awesome, so I'm gonna share it.
Let's begin.

here's the youtube stuff:
(there's 11 videos, enjoy the random trip inside my soul)

And here are the 2 VIMEOs:


The Civil Wars - Forget me not from Green Block on Vimeo.
No comments:

My first job ::: over 10 years later and not much has really changed

I'm taking a sketch class, and I did this free writing reflection moment to get some ideas. I figured it should go somewhere. Hope you like it Blythe! (only person email subscribed to this ish and I'm not even sure that works anymore!!! Keeping up with the internet joneses over here)

I was a hostess at the Casa Gallardo, a rich family that y catholic neighbor taught in private school. But that did not help me get any special treatment. I was a hostess, and I was kindof surprised that the tables had numbers. All the families that needed seating seemed to hate me. I remember being like, don't they think or care about me as a human??!!! They should care about me as a human!

My fellow hostess and I were both hard core sheltered academic idealist types - she was going to Harvard in the fall and I was going to Penn, and we talked about SATS and how hard they were and how stupid people were. She quit within a week. I lasted about 2 months - because I am trying to be loyal. That was stupid. I still have not learned the lesson that some strategic disloyalty is really the best thing you can do for yourself.

There was a bartender with an earring who kept on coming to the hostess table t like, raw on the tables and talk, and I was like dude! you should be at the bar and quick fucking messing with my hostess shit. Then some other waitress (who would always get on my case about having kids sit at her tables, and how she hated families and waiting on families and I was like Charyl, it's a FAMILY RESTAURANT everyone who comes in is a family) - this waitress was like, you know what Lori, he has an illegitimate  child. And that was when I figured it out that he was flirting me - and I was of course horrified. I was just insulted that he - who i considered an adult (he must've been like 23) would FLIRT with me I mean how rude. It wasn't an "oh i'm ugly i am undeserving of flirts" moment, it was more of a - he is an adult and this is just WRONG and also how dare he.

I constantly had to get people chips from this dresser that had a giant metal heating apparatus in it. And  I had to wear a shirt with a lot of chilies on it and the uniform was black pants but I didn't own any black p[ants. Everyone was like chill out its a great way to make friends and I was like THIS IS HOW PEOPLE MAKE FRIENDS!?!

We also had a manager who not so secretly hated me - he'd say things about my attitude, even though I maybe said all of 5 words every shift - and those were mostly to the earring bartender guy, who I now remember had bleached hair (it was the era of nsync) . This manager would always use words that were not really the right word, and me and the snooty hostess laughed at him. HE tried to talk to us about our FUTURE in the restaurant biz and we were like DUDE we barely have a present in the restaurant biz go away. Also i was shocked how many families came to casa gallardo on the fourth of July - like, number one you're a family cook a meal on the holiday, and number 2 it's a mexican restaurant and none of you are like celebrating being Mexican American so what are you doing.

and here are the sketches I thought of:

- worlds most oblivious girl gets insulted whenever anyone flirts with her #storyofmylife
- restaurant manager thinks everyone in his restaurant wants to become a restaurant mogul, but really they're just teenagers, so he's crafted a giant training program
- commercial for the real world for honor roll students (yes, people don't just remember where you're sitting, there's a chart and each table has a NUMBER! Many of the people you meet will have unfortunate haircuts and illegitimate children. Your superiors will use double negatives! get used to it)
- People in family restaurant get increasingly pissed of the more FAMLY-LIKE it gets
- Restaurant workers so loyal to their workplace it's like the knights of the roundtable (Not might IS spirte, might FOR SPRITE, )
- Commercial for a furniture store where every piece of furniture has a different place for nacho chips

Look where I showed up on the internet! 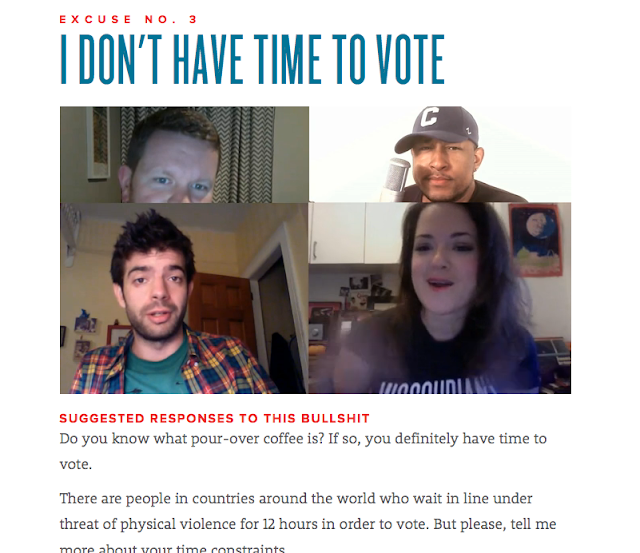 Snaps to baratunde, cultivated wit, the ford foundation and FightForTheFuture on excellent digital campaign skills and hilarity with YourExscuseSucks.com.
No comments:

So it may come as no huge surprise to a few of you that I now work in social media strategy and do a lot of writing for film (marketing, specifically). When I love it, I LOVE it. Some of my favorite moments come when I get to talk about a movie in the way that people talk about a movie and about things that I personally would be interested in. (I'm into people-talk & interesting things and so are you). Surprisingly enough, the way movies are talked about isn't determined by people a lot, but by giant talking machines, so it's good to get back to basics. I'm a human talking machine and so are you.

I'm always trying to sneak in more humor, writer-writing and #realtalk dialogue into my work, so here's how I get to do it.

(also, if you live in NY and you want on my funny advanced movie screening email list, tell me. email's probably best)

Attention hip, indie movie appreciator friends of mine! You're a small and mighty group.
I wanted to invite you to a special screening of the new film Little Birds on MYSTERY DAY at MYSTERY LOCATION (cue link to awesome ninja turtles art!) to be followed by a Q&A with filmmaker Elgin James and actress Kay Panabaker. (you may remember her from the Suite life of Zach and Cody! Also, my personal favorite from her IMDB page, A Modern Twain Story: The Prince and the Pauper  -- well, girlfriend has gone straight up Indie and she's in a movie with Juno 'almost always nude' Temple! She's wearing jorts in this one!)
The movie? Well it's pretty damn dark, and kinda teenage white trashy runaways gang love story gone murdery.  Watch the trailer here.

The film was one of the most buzzed about premieres at Sundance last year - i think mostly b/c people at sundance have never actually LIVED in a super poor trailer trashy town and never ever will, so it excites instead of terrifies them - AND its director was a part of the Sundance workshops, where they take unknowns from wherever (in his case, from a creepy and also murdery gang, and also like, jail) and they make them into FILMMAKERS!
...

*leaves email to quickly join a gang and murder someone and also mail in my sundance workshop applicaion!*

Anyway, this the sundance director's workshop turned my one of my favorite directors/people into my favorite director ever (ahem, his name is Taika Waititi and he made BOY) -- and I like to imagine him giving this creaapy gang leader the sideeye while reading his kinda indie-creeper script. The movie features an all-star cast including Kay Panabaker, Leslie Mann and Kate Bosworth, and opens in theaters this August.

First-time director Elgin James has had a very unique journey to filmmaking - from spending time in the foster care system to forming the notorious FSU gang to serving a year in a maximum-security prison.  He will join us after the film to speak about putting his violent past behind him with this striking directorial debut.He's straight edge now! He won't murder you. I don't think!

Date and Time:
MYSTERY DAY AND TIME
(screening will begin promptly MYSTERY followed by a Q&A with Elgin James and Kay Panabaker)

A 4th of July Passion Play in the making

Lolololori
Hi. I am Lori. I was born in Tupelo, Missisippi, raised in St. Louis, Missouri, educated at the University of Pennsylvania. I live in Greenpoint, Brooklyn. - lori.e.white(at)gmail - Think outside The Arch.

Copywriter for hire. Booked but could be busier.

Email me at lori.e.white at gmail dot com